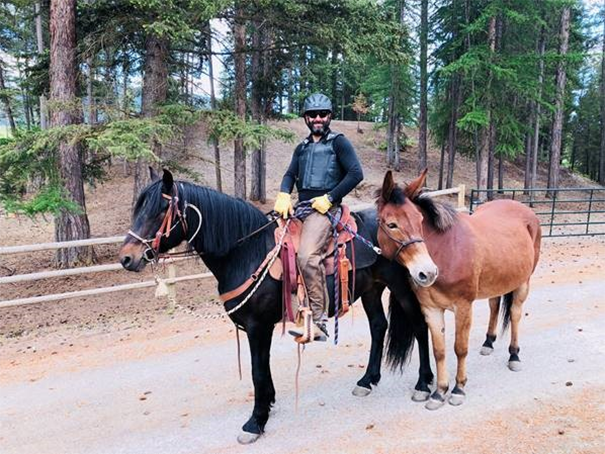 At the age of 20, Dr Julian Sernik decided to leave his hometown of Sydney, Australia for a year-long skiing holiday in Banff, Alberta, a town known for its winter sports and ski resorts. Little did he know that 18 years later he would be living in Cranbrook, BC along with his family of four, practicing medicine and working towards improving BC’s health system.

His career journey towards medicine was filled with diverse interests. Working as a bartender in Banff, paid for the early travel expenses. Upon moving to Vancouver, he took a job as a Ski Patroller at Cypress Mountain, which lasted for ten years, while simultaneously following his academic interests. Initially, he pursued the Nautical Sciences diploma at BCIT. However, it was during his first job as a Deck Officer on a chemical tanker, he realized he wanted to become a doctor.

His natural problem-solving instincts, coupled with his emergency responder experience at Cypress Mountain led him to pursue orthopedic surgery. “There’s something very challenging about fixing things and when you have that as your job then every case is unique in its own way and requires thinking on your feet. It requires analytical abilities and creativity – no day is the same as the day before”.

Alongside his clinical duties, Dr Sernik is also enjoying his role as the Regional Medical Advisory Committee Chair for East Kootenay, an Interior Health Authority initiative. Acknowledging his efforts in this role, the Interior Health Authority nominated Dr Sernik for the Physician Leadership Program, which is funded by the Specialist Services Committee. In 2017 he was valedictorian graduate of this program, which equipped him with skills to design a ‘smart referral program’, as part of which he hopes to formalize and centralize specialist physician referrals to decrease wait times, eliminate unnecessary tests, and enhance collaboration among specialists and primary care providers.

Dr Sernik’s physician leadership activities, as he puts it, have proven to be ‘therapeutic’ for him. He strongly feels that physicians need to have a voice in decision making in matters related to the facilities in which they work to avoid physician frustration. As he states, “The part I’m most proud of is trying to communicate on behalf of other doctors about their concerns, to reflect those concerns, and to help find solutions while mentoring them to be part of the system of leadership.” He believes that “trying to engage people doesn’t always work, but when it does, it shapes peoples’ lives.”