Police and doctors team to help most vulnerable 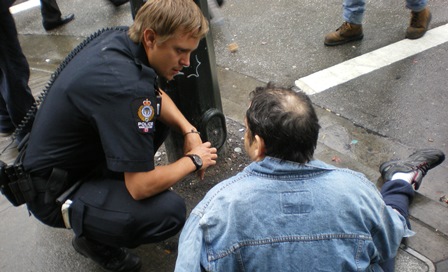 Did you know that a health crisis requiring a trip to Emergency (ER) may include being shackled and escorted by police?  That’s what can happen when it is a mental health crisis that occurs in public, usually with vulnerable populations, such as the homeless.  Recognizing this issue, Dr. Matthew Chow, a psychiatrist with Providence Health teamed with Inspector Howard Tran of the Vancouver Police Department to determine a better response and treatment approach.

The project will support police in the field by connecting them through live video (telehealth) to mental health professionals at St. Paul’s Acute Behavioural Stabilization Unit (ABSU) during encounters with emotional distressed individuals. The concept of using telehealth is not new, but including the police as part of the service delivery solution is unique.

The eventual goal is to allow a physician through a live video feed to make a decision on next steps, such as triaging the patient to an outpatient clinic, detox centre or other appropriate alternative to Emergency, or simply help expedite the ER admission.  In addition, in the field assessments allows patients to be assessed while in crisis, which they might not be once in Emergency. All of this will help prevent unnecessary ER visits, as well as ensure patients who do require in-hospital services are not discharged prematurely.

The project has three phases and began in September 2015. The first phase of the project, acclimatize ABSU staff and police with the idea of using telehealth has been completed and is currently under evaluation. The next phase, using the technology in the field during limited hours should begin in late 2016 or early 2017. For more information, please contact Laura Anderson at landerson@doctorsofbc.ca